Kings Of Leon have just released a live Blu-ray and DVD – recorded at one of their seminal London O2 Arena concerts during the summer of 2009. The Blu-Ray version is available from today (23rd Nov) and features stunning high definition picture quality and sound, the perfect way to enjoy this wonderful band :)

Kings of Leon: Live At The O2 London, England, captures, up-close and personal, the band performing in front of 18,000 adoring fans on one of a three-night stint in June 2009 in London. These shows were some of the biggest of the band’s career in the country that was the first to embrace them, and the symbolism and excitement is palpable. As those who have attended the band’s shows can attest, Kings of Leon go out of their way to have great sound, unusual for the arenas they play in. Produced by Emer Patten and directed by Nick Wickham, Kings of Leon: Live At The O2 London, England, the live sound was mixed by Brent Rawlings while the DVD sound was mixed by Jacquire King and Vance Powell.

Kings Of Leon live at O2 Arena concert on Blu-Ray

Buy the Blu-ray | Buy the DVD 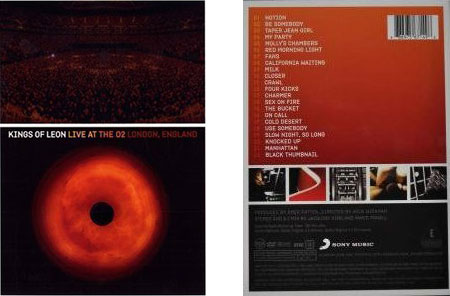 Tickets onsale now via:
Ticketmaster
and
Viagogo
Get Me In
Seatwave
StubHub